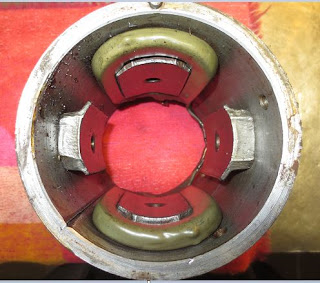 With the introduction of the Powerglide transmission in 1950, Chevrolet decided they needed a stronger starter to turn over the engine with its heavy transmission torque converter attached. So in 1950 Chevrolet introduced the 4 field starter for this application. (Sorry, no picture, but the second “shoes” in the picture above would also have windings around them).
This is a fairly rare starter as most parts stores did not show a difference in the two applications, and would just give you what they had on the shelf.
This 4 field starter is not even mentioned in the 1954 or earlier GM parts books. I do not have a 1955 GM parts book, but my 1956 GM parts book is the first book I have that shows the Powerglide starter separate from the manual transmission starter.
There are two ways to identify the 2 and 4 field starters.
First is by the tag on the side of the starter. The problem is that a lot of starters are missing the tag.
The 2 field starter tag is, 1107109.
The 4 field starter tag is, 1118035.
The second way to identify a 2 or 4 field starter is by the position of the terminal coming out of the field housing, (there is a copper strap from this post to the solenoid).
The 2 field starter will have the terminal coming out of the housing next to an open area of the housing (see pic. Below). 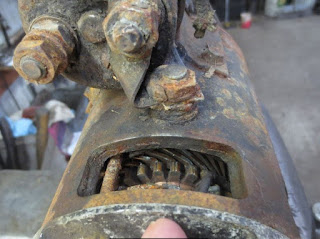 The 4 field starter will have the terminal next to a solid area of housing. 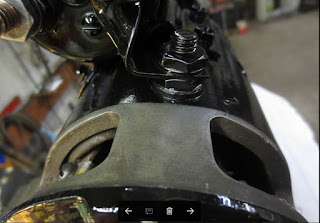 If your Powerglide car is starting fine for you do not worry about the difference between the two starters, but if you find your car turns over slow, this would be a good place to start checking.